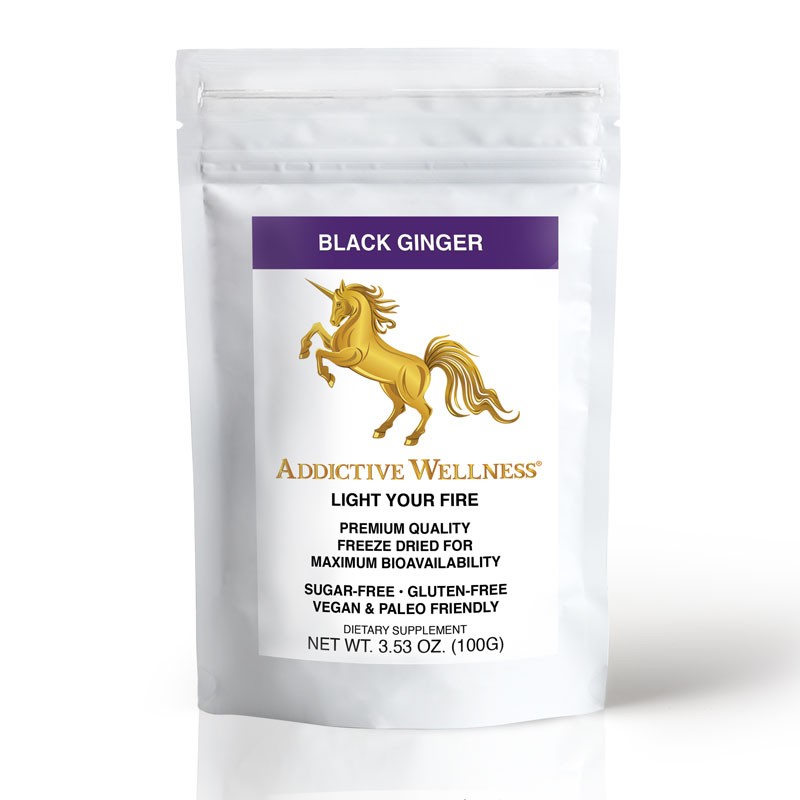 Many people are familiar with the benefits of regular ginger for things like digestion and inflammation, but very few people have ever heard of its cousin, Thai Black Ginger. These two roots are like two cousins that didn't spend that much time together when they were growing up- they look a little similar, share the same last name, have some DNA in common, but their personalities and what they do are totally different.

Black Ginger is an adaptogen that has been used in the traditional Thai herbal system for over 1,000 years. It's very popular amongst adult men and especially athletes and Muay Thai fighters for the effects they notice on their physical performance. (Women can of course also benefit from Black Ginger.) It's known by many names including Thai Ginseng (not directly related to Korean Ginseng), Krachai Dum and Kaempferia parviflora.

Black Ginger also contains compounds called polymethoxyflavones. Research in animal models has found that these compounds in Black Ginger can improve endurance, stamina and grip strength. They also increase mitochondria, which are what make the energy for all the cells in your body.

Research in the Journal of Natural Medicines also found the Black Ginger improved GLUT4 levels. This is responsible for absorbing glucose into cells, so Black Ginger is improving how cells use energy. This enhanced energy metabolism can then lead to the creation of more mitochondria, which are like cellular energy production factories.

And finally, a fit body is nothing if not accompanied by a healthy brain. One of the biggest challenges to everyone's mental health these days is the intense chronic stress that we're exposed to. Research in animal models found that Black Ginger reduced neuron damage and minimized memory impairment during stress, effectively protecting the brain from the harmful effects of stress. It also increased neuron density in the hippocampus and improved spatial memory.

Our black ginger undergoes aqueous ozone treatment after harvesting to kill off microbes without the use of harsh heat or chemical treatments. It is then freeze dried to lock in as much freshness as possible. It takes about 600 grams of fresh black ginger to make 100 grams of freeze dried black ginger, so the final product is very concentrated. Most freeze dried products undergo mechanical grinding to create a powder, which can introduce a lot of heat and damage the cellular structure. Our black ginger is powdered down using a proprietary process that doesn't introduce any heat or mechanical grinding, thus fully protecting the cellular integrity of the root.

We know you'll love it, so we offer a 100% satisfaction guarantee. We can't wait for you to experience what you can do with Thai Black Ginger!